Take Me Tour allows individuals of any background or gender to create and market tourism experiences. The online platform shares tourism’s lucrative economic benefits directly to locals and relieves the infrastructure pressures and pollution that come with overcrowded primary destinations.

Nearly 40 million tourists visited Thailand in 2019, and Bangkok became one of the world’s three most-visited cities. While tourism in primary destinations such as Bangkok is a boon for business, it has a significant impact on sustainability and climate. An influx of foreign visitors puts strain on often-inadequate infrastructure and increases waste production and environmental pollution.

As much as to 80% of trash on Thailand’s beaches is believed to have originated from within the country, mainly from cities like Bangkok, where nearly 400,000 tons of trash have been removed from canals and rivers since 2015. Some of Bangkok’s mega-malls consume as much energy as some of the country’s smaller provinces.

Meanwhile, even though tourism provides jobs and opportunities to millions of people, the presence of large intermediaries in the tourism value chain means that many of its economic benefits never reach local communities. Take Me Tour aims to address these problems. The company empowers local guides to create unique tours that promote sustainable tourism in local communities. Thus, it creates income opportunities for vulnerable populations often overlooked by the mass tourism industry. By enticing tourists away from primary destinations like Bangkok, Take Me Tour also reduces energy use, waste production, and transport emissions, mitigating tourism’s climate impact. 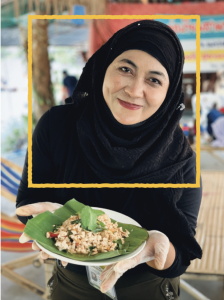 “I’ve worked here for two years now, and I love it because I can decide on the trip by myself and show people from around the world where I live,” she said. “And this brings in income not only for me, but also for my home province.”

Now ADB Ventures is expanding Take Me Tour’s impact beyond Thailand across the Greater Mekong Subregion. A US$ 100,000 ADB Ventures Seed grant will help the company expand from its current footprint of 25,000 guides in 55 Thai destinations to other tourism hotspots in Cambodia and Vietnam. The reimbursable Seed grant gives ADB Ventures the option to make future equity investment in Take Me Tour.

Take Me Tour is structured as a marketplace, allowing local experts to create and promote their own distinctive one-day tourism itineraries.

“We opened up the space so that anyone can sign up as a tour guide, then they start listing the itinerary they would like to show travelers, and we do the marketing for them, we promote the itinerary, and behind that we do verification, so a background screening process with criminal records and ID cards,” said Taro Armornched, Take Me Tour’s CEO.

Many of these itineraries are in lesser-known provinces and cities and focus more on the outdoors, reducing the use of large busses needed for group tours. The itineraries also avoid malls or other energy-consuming locations.

Mai is a local expert who has made a career out of the Take Me Tour platform. “I’ve worked here for two years now, and I love it because I can decide on the trip by myself and show people from around the world where I live,” she said. “And this brings in income not only for me, but also for my home province.”

Mai’s example illustrates the three main benefits that Take Me Tour brings to its local experts.

Package tour guides may make a living wage, but they do not usually realize all the benefits that tourism can bring to a community because destination management companies and other intermediaries in the tourism value chain siphon profits.

Take Me Tour acts as the sole middleman between customers and local experts, charging tourists a fee that then is largely transferred to guides like Mai – who now works with Take Me Tour full-time.

“The average earnings for those that are active is around $400 per month,” Armornched says. “The highest record during the peak travel season for one expert was almost $5,000 per month. Many also want to practice languages, and they like meeting new friends from other cultures.”

Thailand’s GNI per capita, according to the World Bank, was $18,200 in 2018. Per capita incomes are lower outside the capital.

TakeMeTour also empowers local experts to create new experiences. From the perspective of tourists, Take Me Tour offers some unique activities that are unlike mass-market tours sold throughout the region. The rise in boutique local and sustainable tourism is leading many tourists to seek experiences off the beaten path, and the internet has made it easier than ever for people to travel independently, avoiding group package tours.

“When everything is connected, of course people will want to visit the main attractions, but they can do that themselves,” the CEO explains. “People are now looking more for experiences that they couldn’t find on their own, to be more immersed in the destination.”

Finally, Take Me Tour’s focus on equality has led to a collection of local experts that is 60% female. “We don’t push for that,” says Armornched, “but through the platform there is no discrimination.It’s based on quality and performance because it’s review-based.” The appeal for female local tour guides has increased, given flexible working hours, added income and the independence of developing a personal brand.